Does your family have any funny shared memories? The types that cause everyone to burst out laughing, even years later?

My family has a lot of funny memories. I’m not sure if that’s because we’re funny, or we can embarrass ourselves quite often… One of my favorite ones took place in Washington, DC before I started graduate school. My family helped me move, and we went out to dinner at our favorite Thai restaurant. We were stuffed after a delicious meal, but my Dad’s prix fixe dinner included dessert. He almost passed on it, but we all offered to take “a bite” of the famous banana flambé. This dessert entails quite a show; our server rolled a cart and proceeded to cook the flambé right next to our table. She heated butter and brown sugar until it caramelized, then added two bananas and doused everything in flaming cognac. We all clapped as she tipped the bananas into a dish and added two massive scoops of vanilla ice cream and whipped cream. Something about the show made us forget how full we were, because the five of us attacked that flambé. That warm, sticky banana and rich ice cream didn’t stand a chance. As we were scraping the last bits of brown sugar goop from the bowl, my sister Ava got up to use the restroom. And as the rest of us were finally putting down our spoons, a different server came to the table carrying another banana flambé! He explained that our server felt she had “messed the first one up” and redid the flambé. Say what? The first flambé was a masterpiece! But before we could argue, the man plopped down the second flambé and walked away. Well, letting this dessert go to waste would have been a travesty. So we picked up our spoons and dug in. When Ava returned from the bathroom, the shocked look on her face was priceless. She was obviously judging us, yet it did not stop her from picking up a spoon and joining! I’ll admit, even I was surprised when we polished off that second enormous dessert. To this day, whenever someone brings up banana flambé, the five of us burst out laughing – both embarrassed and proud at the same time.

I’ve been wanting to incorporate banana flambé into ice cream for some time now. The opportunity arose last week, while I was working remotely from my parent’s house. It was nearly 90 degrees out, the AC units haven’t been installed yet, and I spied a bunch of ripe bananas in the kitchen. A quick internet search for “banana flambé ice cream” resulted in recipes for banana flambé with ice cream but none for banana flambé-flavored ice cream. Undeterred, I set about developing my own concoction.

My recipe ended up being pretty simple. First, I made a banana flambé puree by baking banana slices in a mixture of brown sugar, cinnamon, a smidge of butter, and a dash of dark rum. I could have used the stove top, but I personally prefer baking over sauteing (I burn myself way too often for someone in her late 20s).

After pulling the bananas out of the oven, I added a squeeze of lemon (to prevent any gross-looking browning) and mashed everything lightly with a fork before covering the dish and popping it into the fridge. The next day, I scraped the cold banana flambé into the blender and added some milk, lemon juice, salt, and vanilla. After blending everything for less than a minute, I poured the base into my mother’s Cuisinart ice-cream maker (identical to mine) and pressed “on.” When I came back 20 minutes later, the ice cream was done! 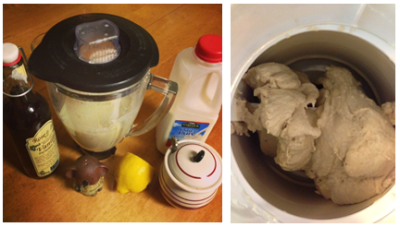 The verdict? I figured banana flambé ice cream would be good, but I didn’t anticipate just how amazing this recipe would be. Roasting the bananas helped to break them down, and the brown sugar and rum glaze resulted in a deep, caramelized flavor that I adored. The rum flavor wasn’t strong, so if you love rum – you could add more. Opting to use whole milk instead of cream was risky, but the recipe turned out to be creamy and not at all icy. Perhaps that is due to the high banana-to-milk ratio? I enjoyed my serving in a gluten-free cone, while my parents opted for bowls. My mom raved about the intense flavor, but my banana-loving dad thought it was almost too intense (what a wimp!). He ended up “cutting” my ice cream with a scoop of plain ol’ store-bought vanilla. But my ouce cream motto is “go big or go home!” I savored every bite of my cone, and I ended up polishing off the rest of the banana flambé ice cream within 24 hours. What can I say? It’s a family thing 😉