For me, the absolute highlight of our honeymoon was a safari in South Africa’s Kruger National Park. One of the largest game reserves in Africa, Kruger boasts 147 species of mammals, including the famous “Big 5” — the African lion, African elephant, Cape buffalo, African leopard, and rhinoceros. And while the safari concept was born in East Africa (where the Great Migration happens), South Africa is known for its luxury safari experience. Which means Kruger is an ideal place for safari novices like myself.

K and I spent three blissful days at the andBeyond Ngala Tented Camp, which a colleague of K’s had recommended. Set on its own private reserve, the Ngala Tented Camp is a magical place. From the moment you arrive, the staff welcomes you and seemingly anticipates your every need. All it took was one mention of my gluten intolerance, and Chef Stephie sent out slices of homemade gluten-free bread with every one of my meals. And the private “tented” accommodations were incredibly comfortable. My favorite features were the secluded outdoor shower and our private deck.

K and I would join four other guests for two game drives each day — one at 5:45am and another around 4:15pm. Each drive lasts over three hours, which sounds like a lot but always flew by too fast. Our guide and driver, Lee-Anne, was insanely knowledgeable about the animals, fauna, and history of the park. Her “tracker”, Richard, had eyes like a hawk and appeared to be one of the most successful trackers at Ngala. Lee-Anne would be casually driving our open-air vehicle and chatting with us, and suddenly Richard would point out elephant tracks or motion that he’d heard a lioness’ growl (which nobody else heard). And, lo and behold, he’d direct Lee-Anne to wherever the animals were. 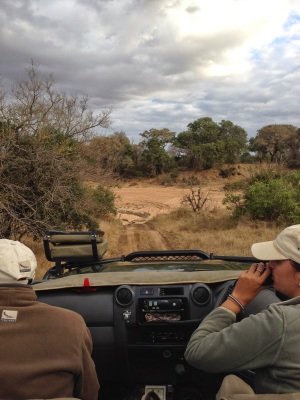 Towards the end of each game drive, Lee-Anne would stop the vehicle in a safe clearing, giving us a chance to stretch our legs and enjoy some coffee (in the morning) or “adult” beverages (in the evening). You could count on one thing making an appearance in the morning and evening: Amarula Cream Liqueur.  I hadn’t heard about this liqueur before, but I quickly fell in love with it. Made from the fruit of the African marula tree, it has a uniquely silky and complex taste. I’d put it in the same family as Bailey’s Irish Cream, but I’d take the rich flavor of Amarula over Bailey’s any day. In the morning, I’d drink my coffee or hot cocoa with a splash of Amarula. And in the evenings, I’d drink a bit over ice. 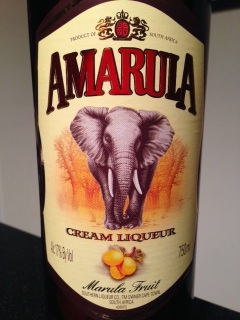 Even with all that Amarula drinking during game drives, I still was excited to see an “Amarula Milkshake” listed as the dessert option one day during lunchtime.
I’m not the world’s biggest milkshake fan (I’d rather eat my ice cream than drink it), but the cold concoction sounded great on a warm African afternoon. And boy, oh, boy, does Amarula make a great milkshake. It added a caramel-like depth to the traditional vanilla ice cream, and I had no problems slurping up the sweet and creamy treat. 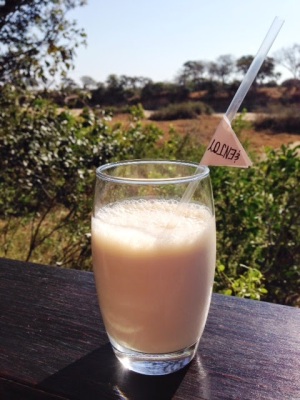 Since coming home, I haven’t been able to get Amarula out of my head. Luckily, a growing number of alcohol store in the U.S. are carrying the South African liqueur — including my neighborhood shop. While I cannot add a splash to my coffee every morning (darn you, real-life responsibilities!), I can enjoy an Amarula milkshake after dinner. So I recently set out to recreate andBeyond’s famous milkshake in my own kitchen. Here’s what I came up with…

The verdict? This is a near replica of the Amarula milkshake I enjoyed at andBeyond’s Ngala Tented Camp. I’m pretty sure the original version didn’t involve ice cubes, but I like the extra body that the ice gives this drink. The taste of Amarula easily shines through the milk and ice cream, giving this milkshake a yummy “adult” flavor. I’d highly recommend that anyone who adores milkshakes – or cream liqueur – give Amarula a try!