Don’t you love when, sometimes, what you desire magically comes to you without any effort? You might receive a call from a long-lost friend you’ve been meaning to reach out to, or get a big discount on something you’d expected to pay full price for. Every once in a while, the stars perfectly align and you can’t believe your luck.

I had one of these moments on a trip last month, when K and I joined our friends Becca and Bryan for a weekend in Mexico City. A mere four-hour flight from Washington, DC, Mexico City seems like a world away. The four of us squeezed a lot into 36 hours (we left early on Sunday), eating plenty of street food, taking a long walk through Chapultepec Park, exploring one of the city’s largest markets, and enjoying a fancy meal at Pujol (quite possibly my favorite restaurant in the world). The only disappointment of the weekend was when we took an Uber over to Frida Kahlo’s house on Saturday afternoon, only to find that they had temporarily stopped letting visitors inside due to a power outage in the neighborhood. The line was getting quite long, so we bailed in favor of taking a stroll through the beautiful neighborhood of Condesa.

Since we had so little time to spend with our friends in Mexico City, I wasn’t planning on going out of my way to find a new ice cream shop. But, alas, the stars were about to align for me (and the blog!): our Uber driver dropped us off in the middle of the Condesa neighborhood. Without a specific plan, we began meandering down the pretty tree-lined streets. We couldn’t have walked more than two blocks when we came upon a true Mexico City ice-cream establishment: Nevería Roxy. 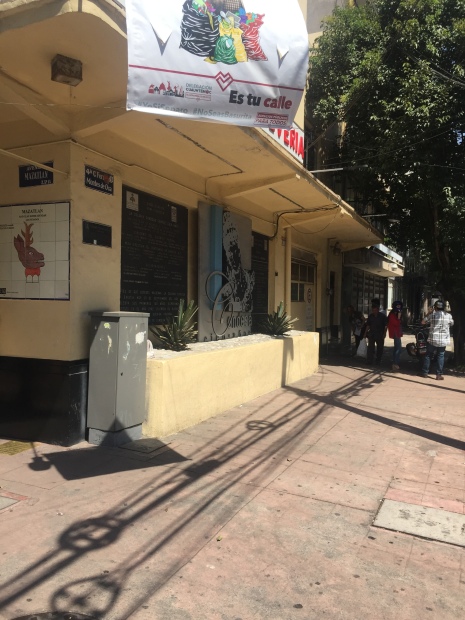 Nevería Roxy is a small family-run ice cream chain, with four locations around Mexico City. The first shop opened over 70 years ago, and the shops are known for their nostalgic 1950s vibe. When we just happened to stumble upon the Condesa shop, I took it as “a sign” that we had to take an ouce-cream break! Nevería Roxy was crowded on a Saturday afternoon, with a long line to get to the counter and plenty of people sitting around the formica tables enjoying ice-cream floats, cones, and sundaes.

Like their decor, Nevería Roxy sticks with good-old fashioned ice cream flavors. With a couple dozen flavors of ice cream (“helado”) and sorbet (“nieve”), there is something for everyone. Some of the ice cream flavors that caught my eye were Arroz con Leche, Tutti Frutti, Amaretto, Macademia, Menta (mint), and Mamey (a local tropical fruit). But several of the sorbet options — Sandia (watermelon), Tamarindo, and Maracuya (passion fruit) — sounded enticing. But when I saw Cajeta, I knew there was no turning back. Cajeta is a traditional Mexican caramel made with goat’s milk, and it reminded me of one of my favorite ice creams of 2015: the Greedy Goat’s salted caramel goat ice cream. Since we had big dinner plans that evening, I stuck with a small cone (called “bola chica”).

While the serving size was small, this cone  set me back a mere 22 pesos, or  USD$1.25. It would be difficult to find a better deal than that!

The verdict? I had high expectations for this ice cream, and Nevería Roxy delivered! The ice cream itself was smooth, dense, and creamy. It was slightly too soft, thanks to the hot day and no air conditioning. But the Cajeta flavor more than compensated; it had a deep, carmelized flavor with just the tiniest tang from the goat’s milk. I found myself wishing the scoop was larger, because I finished this cone in about 2 minutes flat (despite savoring and “mmm”ing the whole time). I’m so glad that we stumbled upon this Mexico City institution!