Last month, K and I stuck to tradition and headed down to Rio de Janeiro for a long weekend of sunshine and beach time. This was a special year, however, since my little sister Carolyn and her boyfriend joined us. The two of them spent a full week in Brazil, spending several days in Búzios before driving to Rio to meet up with us. This was a special occasion – the first-time Carolyn and I have been together outside of the United States!

While our trip only lasted three days, we packed in a whole lot of fun! Since the weather was fantastic, we spent many hours lying in beach chairs on Copacabana Beach, enjoying the array of snacks carried by the many beach vendors and sipping coconut water and caipirinhas. Carolyn and I share a love of swimming, and it felt very special to splash around in the waves together like little kids. Vacation heaven.

We also discovered some new places and activities with Carolyn and her boyfriend. Thanks to Carolyn’s cravings for nutritious lunches, we discovered the deliciously hip, gluten-free fast food shop Jaeé (shout-out Fred, the owner, who was very hospitable). And on Saturday, the four of us rented bicycles from the Sheraton and rode along the beach all the way to Leme and back. Rio is known for being one of the best cities in the world for biking, so I’m not sure why K and I waited so long to try it!

On our last night in Rio, we enjoyed a special dinner at Zuka in Leblon. We agreed that while Zuka is a bit expensive, the staff was incredible (despite a language barrier) and the food was fresh and flavorful. Nothing on the dessert menu spoke to us, however. Lucky for me, one of Rio’s most popular gelaterias is located just a few doors down from Zuka…

Momo Gelato Artesanal is a well-known gelato shop in Rio de Janeiro, churning out Italian-style gelatos and sorbettos in dozens of flavors. They have two locations, but the Leblon one seems to be the original. Momo was very busy on this Saturday evening, with its storefront open to the street and people milling around with cones and cups of delicious-looking ice cream. Momo also offers sweet waffle sundaes. Not waffle cones, but actual waffles!

I thought Momo’s yellow and brown color scheme was surprisingly attractive. Like any uber-popular artisan ice cream shop, Momo sells a variety of shirts, hats, bags and other branded paraphernalia. But the focus of the store is clearly on the long cases of gelato pans. I counted at least two dozen different flavors, including nearly 10 sorbetto flavors. The flavors were posted in Portuguese, but a major advantage of gelaterias is that the gelatos are often are covered in toppings or decorations that identify the flavors. For example, you’ll see hazelnuts and chocolate over Gianduia, crushed pistachio nuts over Pistacchio Siciliano, and coffee beans over Cappuccino. While Momo serves these usual Italian staples among others (like Stracciatella, Pear, and Limoncello), the local flavors that jumped out to me were Caramelo com Flor de Sal (salted caramel), Banana com Canela (banana with cinnamon), and Pão com Nutella (bread with Nutella).

Momo’s serving sizes didn’t look very large, so I decided to order a three-scoop cup. I was immediately drawn to a black-looking chocolate, Neromomo, which the signage noted was 73% cocoa. The color was just so dark and interesting that I had to give it a shot! To cut the chocolate, I also ordered a scoop of simple Cremomo (sweet cream). And in the spirit of “When in Rome Rio,” I rounded out my cup with a Amazônia (açai + tapioca). I call this “Grace’s antioxidant special.” This cup set me back around R $15.00, or around five U.S. dollars, which is quite expensive for Rio! 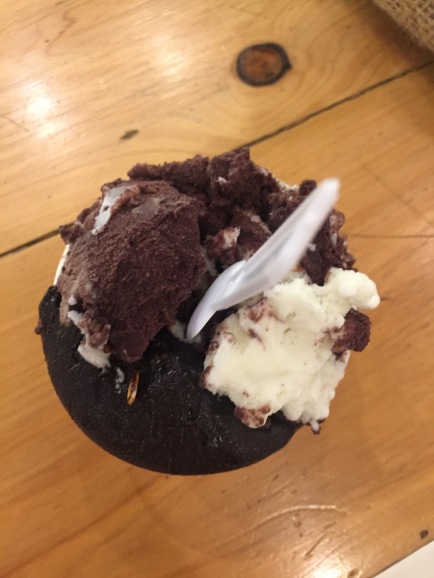 The verdict? I may have finally met my chocolate limit! The Neromomo, Momo’s dark chocolate gelato was incredibly rich and powerful, and not very sweet. I can’t remember ever having a chocolate ice cream quite this dark. While I enjoyed it, this flavor was a bit much for me. It was a good thing that the sweet, milky Cremomo helped cut the overwhelming dark chocolate taste. Sadly, the Amazônia wasn’t as yummy as the açai bowls we had on the beach. The gelato was a bit icy and the flavor of açai wasn’t very pronounced, but I did like the little bits of granola! While I wasn’t “wowed” by these three flavors, I enjoyed the ambiance of Momo Gelato and would happily give it another try!