This post is long overdue! Earlier this fall, K and I had the pleasure of joining two of our dearest friends in Barcelona, Spain for a long weekend. Becca and Bryan were celebrating their one-year wedding anniversary with a 10-day trip to Spain. They traveled all over the country and ended in Barcelona, where Becca studied abroad for a semester during college. Knowing that K had never been to Barcelona, Becca and Bryan kindly invited us to meet them there. I looked forward to the trip for months, and it did not disappoint.

K and I took a red-eye from Washington, D.C. to Barcelona and arrived on Saturday morning. We met Becca and Bryan at our hotel, the W Barcelona, which is right on the beach. We were too excited to be tired, and so we almost immediately headed out to Park Guëll. I remembered the enchanting and eclectic park from my brief excursion to Barcelona during my semester in Madrid many, many years ago, and I was thrilled to go back. The park, designed by Antoni Gaudí, was just as lively and inspiring as I’d remembered, and we enjoyed strolling around together for an hour or two. We kept up a swift pace for the entire weekend, and I can’t believe how much we fit into just two days. Other highlights of the weekend include swimming in the Mediterranean Ocean (it was chilly but fun), wandering around the Boqueria market, walking up the towers of La Sagrada Familia (a basilica also designed by Gaudí), and enjoying delicious paella by the beach.

On our second day in Barcelona, I made sure to find time to sample the local frozen dessert of choice: gelato. We saw countless gelato shops throughout the city, so I did some quick research to help us choose a good spot. According to TripAdvisor, Gelaaati! Di Marco in the Gothic Quarter is not only one of the best gelato shops in the city, but it also has the greatest variety of flavors. Becca and Bryan are just as adventurous as I am when it comes to wacky ice cream flavors, so I knew we had to try it out.

We arrived at Gelaaati! Di Marco in the late afternoon, after sightseeing all morning and afternoon. While none of us were starving (thanks to our fun lunch of tapas), we were more than ready for a little pick-me-up. The shop is located in a beautiful old part of town, nestled among cute stores and restaurants along a cobblestone street. While there was a small crowd in the shop, the friendly folks working behind the counter ensured that the line moved quickly. It took us a few minutes to decide what to order — there are probably 30 flavors to choose from! 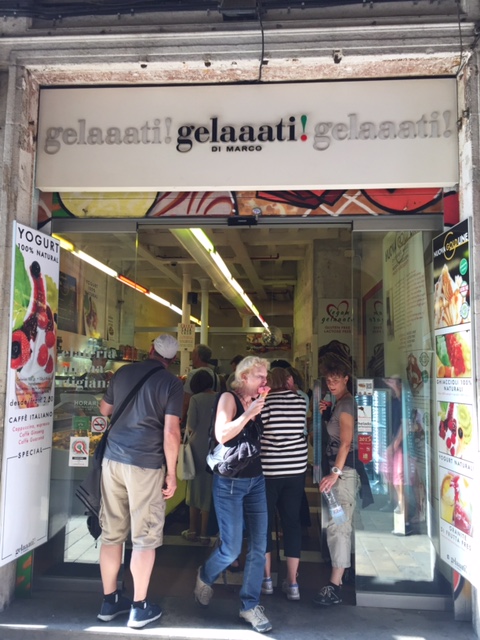 There’s something for everyone at Gelaaati! Di Marco, from traditional gelato flavors like Vanilla, Stracciatella, and Pistachio to more interesting ones like Chai Tea, Tiramasú, and Cioccolato Piccante (Spicy Chocolate). There are also plenty of non-dairy / vegan options, too, including Coco, Mango and Mojito. Interestingly, Gelaaati! Di Marco also offers six premium flavors for a small extra charge. These flavors, classified as “Gold Line” were incredibly decadent. Bryan had his eye on the Zolaus (cream-flavored gelato with gorganzola and fig marmalade) and Milanès (fresh ricotta gelato with saffron and pistachio cookies). Many flavors had traditional Italian or English names, but some (like Canela, or Cinnamon) were in Spanish.

In the end, I decided to go with a medium-sized cup of three flavors: Caffe (for some caffeine!), Dulce de Leche, and Extra Dark (vegan chocolate sorbet). My cup cost me about $4 Euros. Bryan’s cup was more expensive because of the two premium flavors he chose. 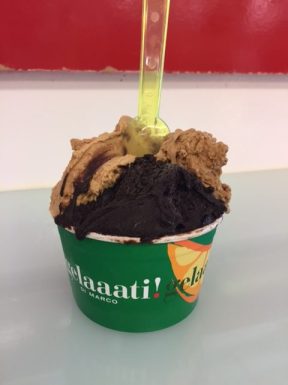 The verdict? This gelato was smooth, thick, and almost sticky (in a good way). The Caffe was strong and not very sweet. While it fit my preferences, folks who don’t drink coffee might find it too potent. The Extra Dark Cocoa was my favorite of the three flavors; very chocolatey, delicious, and creamy – I couldn’t believe there was no dairy in it! I’d order this time and time again. The Dulce de Leche was yummy but not life changing. It’s burnt-sugar undertones were a bit too harsh. Becca’s favorite was the Pistachio, which she thought was crisp and refreshing.  Bryan let me taste both of his flavors. I thought the Milanès was quite delicious, and liked the subtle saffron taste paired with the sweet pistachio brittle. But neither of us enjoyed the Zolaus; the gorganzola flavor was really strong. But I had no problem polishing off my cup before we continued off for more sightseeing!