This Presidents’ Day weekend, K and I embarked on a quick trip to Rio de Janeiro. Between a pre-trip bout of food poisoning and the Zika situation in Brazil, I can’t say I was entirely thrilled to head down there this year. But K successfully ushered me onto the plane, armed with lemon-lime Gatorade and some potent bug spray. 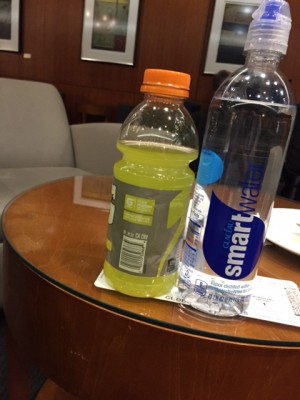 Despite low expectations this year, we had a really nice weekend! We spent about 80% of our waking hours on the beach covered in 50 SPF. It was incredibly hot and sunny, so frozen treats and drinks were a must. While I ate plenty of frozen açaí (more on that in the next post) and drank, I couldn’t let a whole weekend pass without getting ice cream. So between the beach and heading back to our hotel to shower on Sunday, K called up an UberX (yes, Uber is available – and cheap – in Rio!) to bring me to Sorvetes Ally in the Copacabana neighborhood. We’d spotted the shop on Friday after dinner, when we were both too stuffed to consider eating anything more. This time, I brought my appetite! 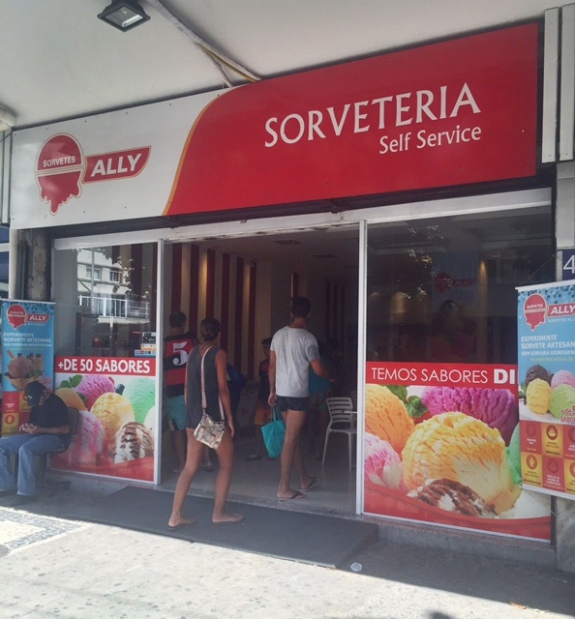 Sorvetes Ally is the first self-serve ice cream shop I’ve stumbled across. Nearly every city in America has a self-serve frozen yogurt place or two, but the concept hasn’t extended to traditional ice cream or gelato shops. Perhaps hygiene has something to do with this? Hard ice cream and gelato requires scooping from tubs, and it must be fairly easy to spread germs via scoops and standing (or coughing/sneezing) over open tubs. Still, I wasn’t too horrified with the concept when I saw how relatively clean and well-staffed Sorvetes Ally was. 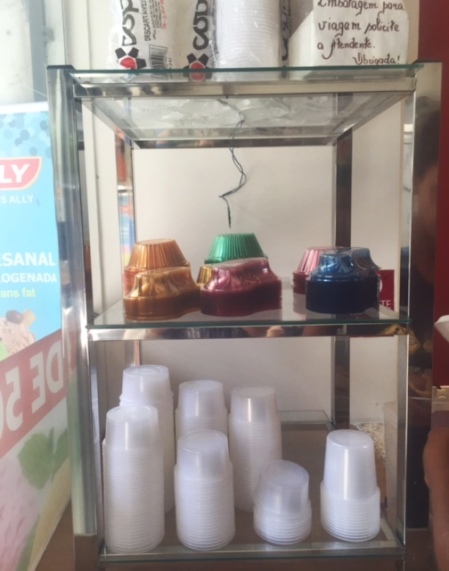 The secret must be out, because Sorvetes Ally was hopping on a Sunday afternoon. We had to stand in line for a minute or two, which gave me a chance to take in the surroundings and observe the self-serve experts ahead of me in action. But then the hard part: deciding what flavor to try! Sorvetes Ally has more than 20 options to choose from, and there is no menu. I had to scan all the little signs attached to the tubs.

I must have looked a bit lost, because the young woman in front of me kindly pointed out Ovomaltine and gave me a smile and the universal “thumbs up” sign. I recognized it as the Swiss brand of malted chocolate. While I’m not the biggest fan of malted flavors, I had to try it after the recommendation! The only flavor that caught K’s eye was Queijo com Goiabada (Cheese & Guava Paste), so I scooped some of that into my cup, too. I was very skeptical, though, given my last experience with cheese ice cream. With room to spare, I added two other interesting-sounding flavors: Tapioca and Ameixa (Plum). When its executed well, I adore tapioca ice cream!

Like self-serve froyo places in the U.S., Sorvetes Ally charges by weight. I forget how many ounces my cup was, but it cost me the equivalent of around $2 USD. Not bad! 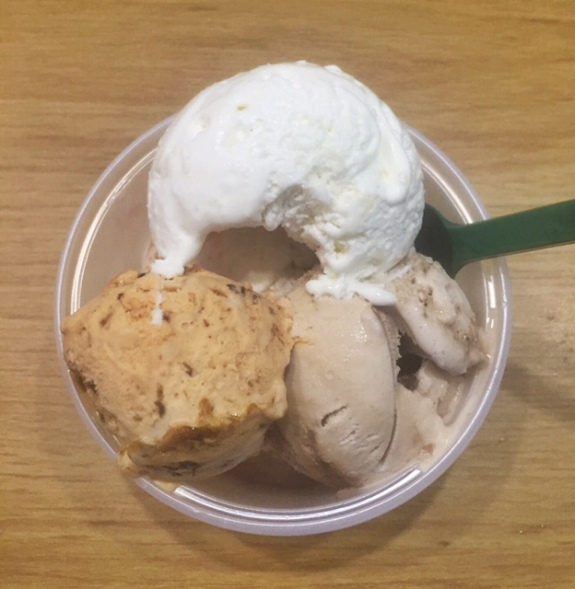 The verdict? I had nearly as much fun trying all the different flavors as I did scooping them! We both enjoyed tasting multiple flavors and having control over the size of each scoop. The only downside was that we rushed to finish before the ice cream melted into mush. I don’t think the constant opening of the ice cream freezers — and the waits between scooping — did anything to maintain the ice cream’s temperature. The surprise standout was the Ameixa, which featured plenty of little soft plum pieces and a deep sophisticated flavor. I loved the dark color and subtle sweetness of this flavor. Sorvetes Ally’s Tapioca lived up to our high expectations; rich cream-flavored ice cream chock full of soft-yet-chewy tapioca pearls. I must figure out how to recreate this one at home! The Ovomaltine did indeed taste of malted chocolate, and the level of malt was pleasant. K was happy with the Queijo com Goiabada, which he thought was a nice blend of sweet and savory. I took one nibble and just couldn’t get over the actual chunks of cheese in my ice cream. I should probably just give up on cheese ice cream in Brazil. Who am I kidding? I’m sure K will talk me into it again next time 🙂

While the “self-service” ice cream concept is a bit gimmicky (and a germophobe’s nightmare), Sorvetes Ally executes it well with their wide variety of ice-cream flavors and toppings.

One thought on ““Self-Service” Ice Cream in Rio de Janeiro”