It’s only been a couple weeks, but my trip to Hawaii happened ages ago. I’m currently visiting Grandma Edie in Peoria, Illinois, where the warmest it will get today is 24 degrees. It feels weird uploading iPhone photos that were taken on 95-degree days in a tropical paradise. Did this trip even happen?

As my friends and family will tell you, I don’t like hot weather. But for this past New Years Eve holiday, K had his heart set on warmer weather. I was happy enough to go along, but I have to admit that I wasn’t giddy with excitement over his choice of Hawaii. I’d been to Honolulu once before and just remember the heat and crowded beaches. Well, this trip was different.  We spent four days on the island of Kauai, and I left totally in love with it. The island is far less populated than Honolulu (obviously), and the pace of life is slower and calmer. All in all, the ideal environment to relax in.

Surprisingly, there weren’t many standalone ice cream places in Kauai. There are several Lappert’s outposts, but I didn’t make a special effort to get to one since it’s not based on Kauai. Instead, I embraced the Kauaiian lifestyle and took a relaxed approach to satisfying my sweet tooth. Luckily, I had plenty of opportunities to enjoy frozen treats each day. Some were alcoholic, such as frozen margaritas and piña coladas. I wanted to share some of my favorites with you all….

We chose Brennecke’s Beach Broiler for our first dinner on Kauai. K had been there before with his family and thought it was a fun spot. After a long day of travel,  we dropped our bags in our room at the Sheraton Kauai Resort on Po’ipu Beach and took showers before heading out for dinner. After a fun walk on the beach, we arrived at the busy beachfront restaurant. Brennecke’s is colorful and lively,  an institution that’s popular with locals and tourists alike. After a relaxed and yummy dinner (I had fish tacos!), K encouraged me to take a look at the dessert menu. It was a short menu, and only one thing caught my eye: Bob’s Favorite Ice Cream Pie. The description sold me: “Coffee ice cream, macadamia nuts, chocolate fudge & coconut on a chocolate cookie crust.”

The verdict? I was so glad that we ordered this! While the ice cream itself wasn’t life-changing, the combination of coffee, chocolate, and nuts was quite satisfying. I love macadamia nuts and don’t eat them often, so this was a nice cool welcome to Hawaii. Both K and I enjoyed the thick layer of fudge on top of the ice cream, while we ignored the whipped cream (not necessary here). While I ate around the chocolate cookie crust to avoid the gluten, K seemed to enjoy it. The slice was a great size for sharing among 2 or 3 people. Overall, I had a great time at Brennecke’s Beach Broiler and would recommend Bob’s Favorite Ice Cream Pie to those looking for a sweet nightcap.

Our second day in Hawaii might have been my favorite. It was a great blend of relaxing beach time and fun island adventures. K rented us a red convertible, which made simply driving around the island a blast! That afternoon, we visited the Kauai Coffee Company‘s coffee estate (so fun!) before driving up to Waimea Canyon. At the base of the steep drive up to the canyon, we found one of the most famous shave ice stands on Kauai: JoJo’s Shave Ice.

I remember my first shave ice experience, in Honolulu a number of years ago. I’d expected it to be like the  snow cones my sisters and I adored from the neighborhood ice-cream truck. But I was shocked by how ice could be so fluffy and light! Hawaiian shave ice is very fine and absorbs flavors better than the crushed ice I’m used to in a snow cone. Needless to say, I am a fan and couldn’t wait to get my hands on a shave ice in Kauai. And JoJo’s did not disappoint. We visited the original location, but there is another shop on the northern coast of the island.

JoJo’s is a no-frills, authentic shave ice shop. They offer tons of flavors and variations. I must have spent a good 10 minutes reading through all of their signature combinations: 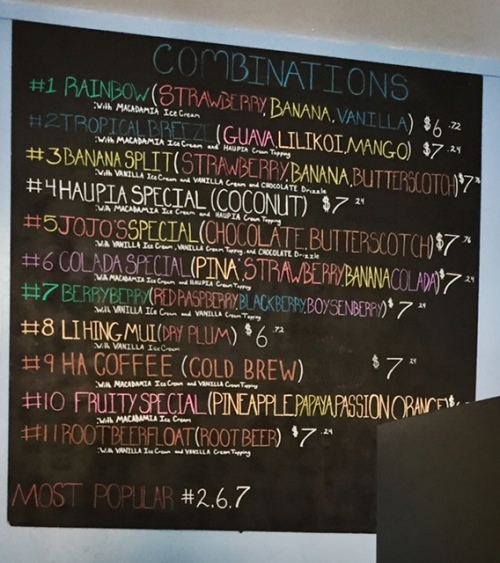 JoJo’s has nearly 60 different flavors, and they  make every syrup in-house. For the ultimate shave ice experience, you should get a scoop of vanilla or macadamia nut ice cream in the bottom of your cup. I was still pretty full from lunch, so I stuck with just ice. In the end, I customized my own shave ice using three of my and K’s favorite Hawaiian flavors: Pineapple, Coconut, and Guava. This 30-ounce cup cost me $4.75. 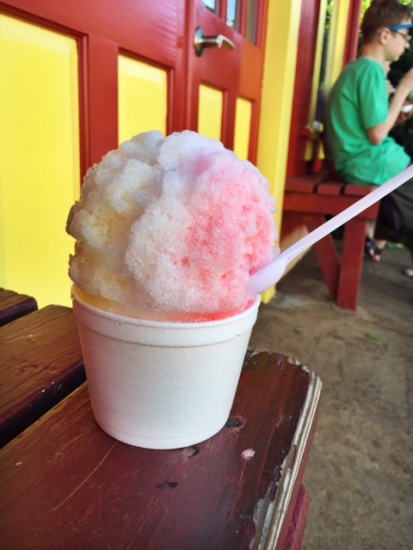 The verdict? Oh goodness, this totally hit the spot. It’s been years, but this shave ice tasted like the best I’ve ever had! JoJo’s ice shavings are perfectly fine, and there were no big chunks of ice in my entire cup. The ice-to-syrup ratio was perfect, and the flavors did not taste artificial. My favorite was probably Guava, closely followed by Pineapple. The Coconut was yummy, but less pronounced than the other fruity flavors. Overall, this cup was heavenly on this warm Hawaiian afternoon.

Before heading to northeastern Kauai to spend New Year’s Eve at the St. Regis Princeville Resort (which was amazing), K and I enjoyed the most festive meal of the entire vacation at Keoki’s Paradise. This was another place K had already been to, but he knew that it was right down my alley. This place is so HAPPY. Despite being nestled in a shopping center, Keoki’s Paradise feels like another world! This massive open-air restaurant is fully decked-out in Polynesian-style garb — tiki torches everywhere, rustic wooden benches, tropical flowers and trees, and waterfalls. It’s like a grown-up Hawaiian version of the Rainforest Cafe (coming from me, this is a big compliment!).

Dinner was delicious; K and I both ordered the “Chef’s Fresh Catch Duo,” which is two of the day’s freshest fish prepared two ways. Today, it was Mahi-Mahi and Opah, both prepared in different ways, and served with steamed veggies and the most-rich coconut rice. It must have been the first or second time we’ve ever ordered the same meal at a restaurant (with the exception of burgers or steaks), so I got a kick out of it. I ate mindfully, as my mother-in-law (hi, Jan!) had tipped me off about a wonderful mint-chocolate ice cream dessert at Keoki’s.

When the dessert menu arrived, I quickly identified which one Jan had recommended: the Mint Chip Hula Pie. It was listed under Kimo’s Original Hula Pie, which sounded identical to the dessert we’d shared at Brennecke’s! But as it turns out, the “Hula Pie” ice-cream pie concept was originally developed nearly 40 years ago at TS Restaurants, which owns a bunch of restaurants including Keoki’s Paradise. If you’re interested, the Cooking Channel even did a video about it!

The verdict? Mint chip is one of my favorite ice-cream flavors, so I couldn’t go wrong with this. The slice was massive – probably better for 3 or 4 people to share. I loved the extra fudge sauce, which was at room temperature and didn’t melt the ice cream. The mint-chip ice cream itself wasn’t anything special; it tasted like the typical stuff you get in tubs at the grocery store. But cover it in whipped cream, fudge, and a half-cup of mini chocolate chips, and you’ve got yourself a treat! Still, I have to admit that I preferred the knock-off version of Hula Pie at Brennecke’s. It tasted more “Hawaiian” with the toasted macadamia nuts and coffee flavors.

All in all, I got my fill of frozen treats in Kauai!