Winter in DC has been rough. Not so much for me (I’d take extreme cold over extreme heat any day) but for K. He’s an avid runner but loathes the treadmill with passion. Thus, he continues to run outside when he’s in DC — coming back with a ruby-red nose and shirts frozen with sweat. Needless to say, K was eagerly awaiting our Presidents Day trip to Rio de Janeiro in Brazil.

Like last time, K and I stayed at the Sheraton Rio Hotel & Resort (thank you, hotel points!). And once again, we spent our days lounging by the hotel pool or down along the popular beaches of Leblón and Ipanema. We both drank more than our fair share of fresh coconut water and cold caipirinhas — two of my favorite Brazilian specialties.

While it can be difficult to eat healthily on vacation, the entire city of Rio de Janeiro seems to focus on healthy eating and active lifestyles. You don’t see much fried food around, but it’s easy to spot fresh fruits and vegetables on restaurant menus and in little corner markets. Thus, K and I are able to balance fun vacation indulgences with some fresh produce and super-foods. On Saturday, for example, we enjoyed a lovely dinner at Zazá Bistrõ Tropical in the Ipanema neighborhood. Seated on the restaurant’s romantic outside patio, we savored crunchy cassava chips with wasabi mousse, grilled fish, smoked steak and plenty of grilled vegetables. So needless to say, we didn’t leave feeling hungry. But that didn’t stop K from suggesting an ice-cream stop.

Just another reason I love the guy 😉

In my ice-cream research before Rio, Mil Frutas popped up time and time again. Mil Frutas has many locations around the city, and the ice cream receives some glowing reviews on TripAdvisor. K checked his iPhone and lo and behold, there was a shop several blocks away from us!

After an enjoyable stroll down the street, we spotted the well-lit storefront. 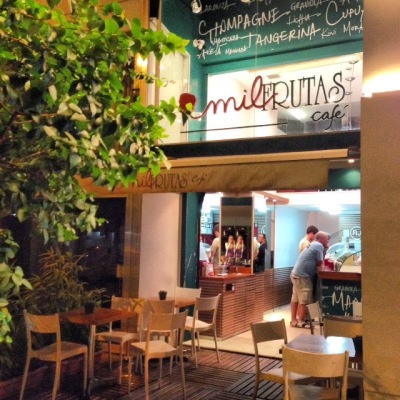 I was excited to see just how long the menu is at Mil Frutas. In fact, they might offer more ice-cream flavors than any other place I’ve been to?

Mil Frutas loosely divides their ice creams into several categories, including “sabores de frutas” (fruit flavors) and “sabores cremosos” (creamy flavors). There are also several “sabores light”, but who cares about the diet ice cream flavors? Not me!

I tested K’s patience by studying the menu for far longer than necessary. Not only was I trying to loosely translate the flavors from Portuguese to English, but I wasn’t sure what I was in the mood for…

Some of the local Brazilian flavors such as Coco, Açaí, and Tapioca sounded delicious. And while I nearly picked Tapioca, I was worried it wouldn’t live up to the amazing version I had at Sorvete Itália during my last trip. Other flavors that caught my eye included After Eight (like the chocolate mints), Figo Verde com Marscapone (i.e. Green Fig and Mascarpone) and Banana Caramelada. And I’m sure there were even more delicious flavors that I missed because the Portuguese words didn’t resemble either English or Spanish words.

In the end, I decided on Figo com Água de Coco (i.e. Fig and Coconut Water) and Chocolate Branco com Amêndoas (i.e. White Chocolate with Almonds). I figured the flavors might clash, but both  sounded refreshing and light for a warm evening.

The verdict? Surprisingly, this this ice cream was just okay. Neither flavor made me swoon, but both were unlike anything I’ve experienced in the United States. It took me a while to warm to the  Chocolate Branco… it tasted artificial to me at first, but I grew accustomed to it and ended up polishing it off. The almond chunks were soft but retained some of their bite. While I’m not sure what I expected Figo con Água de Coco to taste like, it surprised me! The actual base was icy from the coconut water, and it reminded me more of a creamy take on Italian ice than of traditional ice cream. The best part was the bits of fig seeds in every bite. While neither flavor was memorable, they were light and refreshing. I’d like to give Mil Frutas a second chance next time I’m in Rio; there are so many other flavors to try, and I’m sure some of them are stellar.