One of my favorite questions to ask people is: “If you couldn’t live in the state you currently call home, where would you most like to move?”

Now, this is a difficult question for me to answer. If I weren’t working in Washington, DC, the obvious places to move would be Seattle or Boston. I’ve lived in both places and have loads of family and friends there. But there is a third city on my list: Denver, Colorado.

From the first time I set foot in Colorado, I’ve been totally enamored with this state. The immense sky, the majestic snow-capped mountains, the local cowboy attire… I simply can’t get enough. And the fact that Denver is home to one of my best friends, Elysia, and to the annual Great American Beer Festival (GABF) doesn’t hurt 😉

A few weeks ago, K and I headed out west for our fifth GABF together. Per tradition, we spent most of the weekend up in the mountains at Elysia’s parents’ house in Idaho Springs. And – as always – I enjoyed the time with Elysia, her family, and Rupert (Elysia’s lovable Great Dane) even more than the beer festival itself. Still, it was an epic GABF; the crowds were bigger and the beer competition was even more fierce. And as someone whose gluten intolerance prevents me from enjoying most beers, I was excited about the expanding gluten-free offerings.

No matter how many days I spend in Colorado, I’m never quite ready to leave. But this year, the bittersweet drive to the airport was sweetened by a pit stop at Little Man Ice Cream in Denver. Elysia had heard it was the best ice-cream spot in town, and she’d patiently waited to try it until we could go together. So about two hours before my scheduled departure, Elysia pulled up to a 28-foot tall cream can. 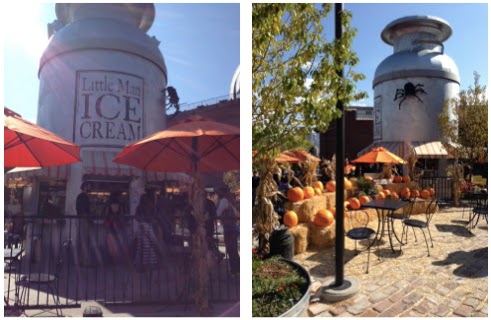 Little Man Ice Cream is a well-known ice cream shop in the Highlands neighborhood of Denver, and its massive cream-can structure has become a local icon. Named after the founder’s father’s nickname,  Little Man first opened its doors (or should I say windows?) in 2008. But despite being just five-years old, it’s already earned a legendary reputation as one of the best ice-cream spots in Colorado. The ice cream is hand-made a couple blocks away, and Elysia says there is usually a long line at the ice-cream counter. Oh – and customers have something to feel extra-good about; Little Man guarantees that for every scoop of ice cream you buy, they’ll donate a scoop of rice to developing countries. An ice-cream shop with heart? It doesn’t get any better than that!

We parked, put the leash on Rupert, and approached the cream can. I loved how Little Man decorates its extensive outdoor seating areas with autumn “flair”: pumpkins, bales of hay, and even a scarecrow. These little touches put me in a good mood and eased the disappointment when I read the day’s flavor offerings and saw that Fluffernutter wasn’t on the list. Elysia and I had made the rookie mistake of checking the flavors online while en route to Little Man. We both got our hearts set on the ice cream named after my all-time favorite sandwich. But, luckily, Little Man had about a dozen other flavors to choose from. Most of them were unique, although not as crazy as the flavors I saw last year at Sweet Action in Denver. Some of the Little Man creations that stood out to me included Crème Fraîche, Balsamic Strawberry, Dulce de Leche and Salted Oreo. In the end, Elyshia went with a small cup of Peaches-N-Cream, while I asked for a small cup with half Mexican Chocolate and half Banana Chip. We forked over $2.50 each and soon enough, we were walking towards the pumpkin patch with these beauties.

The verdict? First of all, kudos to Little Man for their generous scoops of ice cream. Too many trendy parlors charge big prices for teeny-tiny scoops, but that isn’t the case at Little Man. While the patio was crowded, we found an open bench big enough for me, K, Elysia and Rupert (yes, he’s tell enough to sit his butt on benches). From the first bite, the firm, dense creaminess of Little Man’s ice cream won me over. This is not “light” ice cream, and the high fat content gave the ice cream a satisfying richness that left me full for hours. I expected Banana Chip to be my favorite, but it was Mexican Chocolate that stole the spotlight. You can taste the higher-quality chocolate Little Man uses, and the subtle cinnamon flavor added a nice earthy depth that tasted great on an autumn afternoon. The real bananas in the Banana Chip had a nice caramel-y flavor, and the big chocolate chunks added a nice crunch in every-other spoonful. Elysia loved that her Peaches-N-Cream was chock-full of tiny bits of real fruit. Still, Elysia and I had the same thought: Little Man’s creations have all the makings of “out-of-this-word-AHmazing” ice cream, but we just wanted the flavors to be more intense. The cinnamon in Mexican Chocolate, the banana in Banana Chip, and the peach in Peaches-N-Cream were yummy but too subtle. But while Little Man could kick up the flavor a bit, but it’s tough to beat the experience (or the company!) here. I can’t wait to come back! 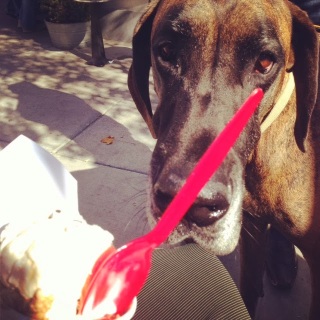